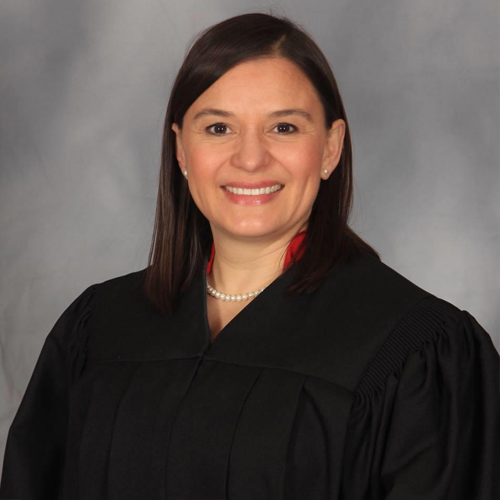 The Honorable Judge Rossana P. Fernandez is a Cook County Full Circuit Court Judge, appointed by the Illinois Supreme Court in February 2015 and Elected in November 2016. Judge Fernandez is the first Hispanic ever appointed to a county-wide judicial position by the Illinois Supreme Court in Cook County. She is currently assigned to the Domestic Relations Division where she currently presides over an individual calendar.  Judge Fernandez previously served in the Domestic Violence and Traffic Court Divisions.

Judge Fernandez began her career as a civil litigation trial attorney at Galvin, Lowery & Meade.  She subsequently joined the law firm of Sanchez & Daniels in January 2000 and became their first Latina Partner in January 2007 where she served as primary trial counsel for a variety of clients, including fortune 500 corporations. Immediately prior to her appointment, Judge Fernandez owned her own law practice, Fernandez and Associates, LLC, where she continued to practice in general civil litigation.  Over her career in civil litigation, she handled a variety of cases including Construction Negligence, Premises Liability, Transportation, Product Liability, Personal Injury and FELA (Federal Employer’s Liability Act), among others.  Judge Fernandez practiced in both State and Federal courts and served as an Arbitrator for the Cook County Mandatory Arbitration program for 15 years prior to ascending the bench.

Rossana P. Fernandez was born in Chicago to immigrant parents from Guatemala and Uruguay and is a native Spanish speaker. She is a graduate of Lane Technical High School and attended the University of Illinois at Urbana-Champaign where she received her Bachelor of Arts degree in English Literature and History with Honors. Judge Fernandez received her law degree at IIT Chicago Kent College of Law in 1996.

Judge Fernandez currently serves on the Supreme Court Advisory Committee for Access to Justice and has presented various educational seminars on a variety of topics for the Northwest Suburban Bar Association (NWSBA), Hispanic Lawyers Association of Illinois (HLAI), Advocates Society of Lawyers, Aspira, and the Coalition of Women’s Initiatives in Law to name a few.  Judge Fernandez is particularly honored to have served as a speaker at the National Convention for the American Constitutional Society for Law and Policy in Washington D.C.