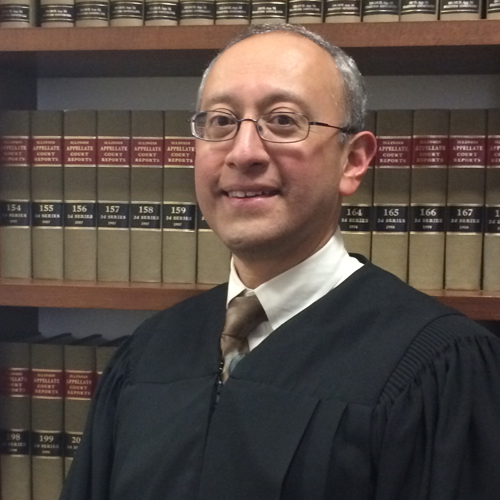 Hon. Mark J. Lopez has served as an Associate Judge for the Circuit Court of Cook County for twenty one years since his election in 1999.  After two weeks in traffic court, he was assigned to Juvenile Court- Child Protection Division for 2.5 years until his transfer to the Domestic Relations Division in August of 2002 where he currently presides over an independent calendar   Judge Lopez began his legal career as a prosecutor for the Office of the Cook County State’s Attorney’s Office and also served as an Assistant Illinois Attorney General as the Chief of the Workers Compensation Division.  He was also engaged in private practice in Chicago’s Pilsen community with his late father Honoratus Lopez who was one of the first Latinos to be admitted to the Illinois Bar.

Judge Lopez has spent his career providing judicial externship opportunities to area law students. He has lectured at CLE’s sponsored by area bar associations as well as judicial education conferences. He serves as a mentor to new judges and has also participated in international judicial exchanges with Mexico, Poland and most recently Lebanon. Judge Lopez earned his Economics degree from the University of Illinois at Chicago in 1979 and his Juris doctorate degree from Northern Illinois University College of Law in 1983.He is married with two adult daughters and two grandsons.