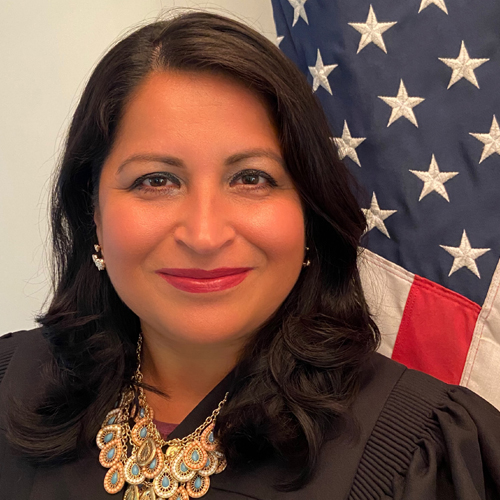 Judge Laura Ayala-Gonzalez was elected to a Cook County wide vacancy on November 3, 2020.  She was sworn in as a Cook County Circuit Court Judge on December 7, 2020.  Her first assignment was serving in the Traffic Division.  Currently, she is assigned to the First Municipal Division where she presides over Eviction cases.

Judge Ayala-Gonzalez was born in El Paso, Texas and was raised in Ciudad Juárez, Chihuahua, Mexico until she was about six years old.  She moved to Melrose Park, Illinois with her mother and grandparents and is the oldest of her two sisters. She is married and is the proud mother of three sons.

She attended Melrose Park Elementary School and graduated from Trinity High School.  She received her B.A. from Bradley University in Peoria where she majored in the Administration of Criminal Justice, Sociology, and Spanish.  After, she returned to Melrose Park where she got married and had her first son. She then worked at the Chicago Bar Association while she attended the John Marshall Law School where she received her Juris Doctorate in 2002.

With over 19 years of experience, she has devoted her legal career to public service and worked primarily as an Assistant Cook County State’s Attorney.  Prior to ascending to the bench, she was a Supervisor in the Felony Trial Division at the George N. Leighton Criminal Courthouse.  She supervised 18 Felony Trial Assistants ensuring that cases were prosecuted fairly and handled properly.  She has extensive criminal experience and has tried a variety of jury and bench trials including murders, attempt murders, armed robberies, aggravated kidnappings, sexual offenses, and other violent felonies.

She is very active in the community and has assisted in immigration, domestic violence, and gang conflict initiatives.  She also mentors young lawyers and students of all ages from elementary, high school, college, and law school.

Member of the Trinity High School Board of Directors