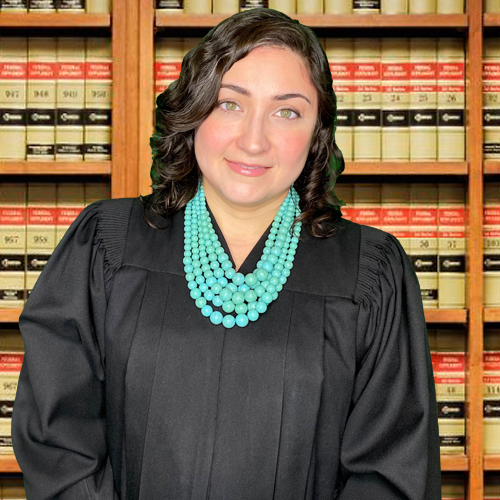 The Honorable Judge Beatriz Ana Frausto-Sandoval was elected to the Circuit Court of Cook County in November of 2018.  She ran in the County’s overwhelmingly Latino Fourteenth Judicial Subcircuit, where, at the time, there had not been a contested judicial race in over two decades.  Judge Frausto-Sandoval is currently assigned to the Domestic Violence Division, where she has presided over both civil and criminal courtrooms.  She currently hears misdemeanor bond and felony preliminary cases. She is also an adjunct professor at Loyola University Law School, where she has taught an immigration law practicum for three semesters, as well as supervised students on service trips to the Arizona border and to rural Louisiana, where they provided legal assistance in asylum and other immigration matters on behalf of NGO’s representing clients at immigration detention centers in Arizona, Louisiana, and Illinois.

Prior to joining the judiciary, Judge Frausto-Sandoval practiced primarily in immigration law.  She worked to keep families together in the U.S. for thirteen years, representing people in all manner of affirmative immigration filings and concentrating in removal (deportation) defense and the cross section of criminal and immigration law.  As an attorney, she also provided free legal advice and know-your-rights presentations to immigrants and individuals in collaboration with various charitable, non-profit and labor organizations.

Judge Frausto-Sandoval graduated from DePaul University College of Law in 2005, and received a Bachelor of Arts in English Literature and Spanish from Washington University in St. Louis in 2002.  She is a first-generation Mexican-American with roots in Guadalajara, Jalisco, Mexico. She is the youngest of nine children, two of which were born in Guadalajara prior to her parents’ immigration to the United States. Her father was a steelworker & union steward in the 1970’s in Chicago & the western suburbs. Her mother was an avid writer and reader of classic literature and poetry. Judge Frausto-Sandoval is passionate about permaculture/gardening and conservation, which she practices in her south side backyard garden, where she grows fruits, vegetables, flowers, as well as raising bees and two young children with her educator husband.